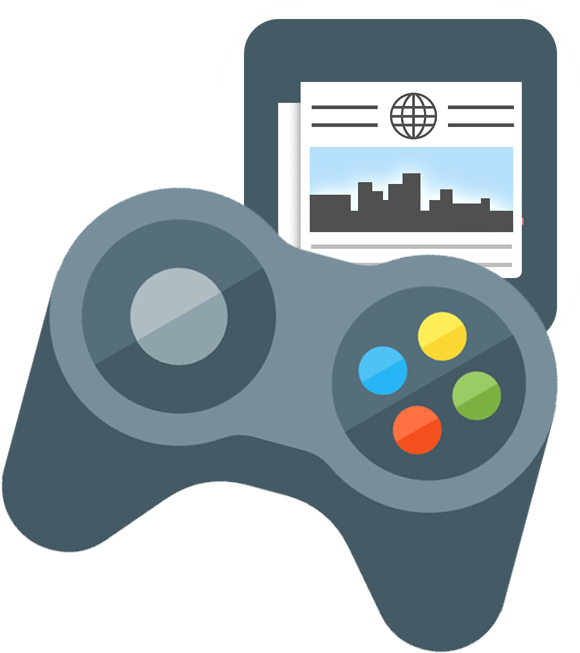 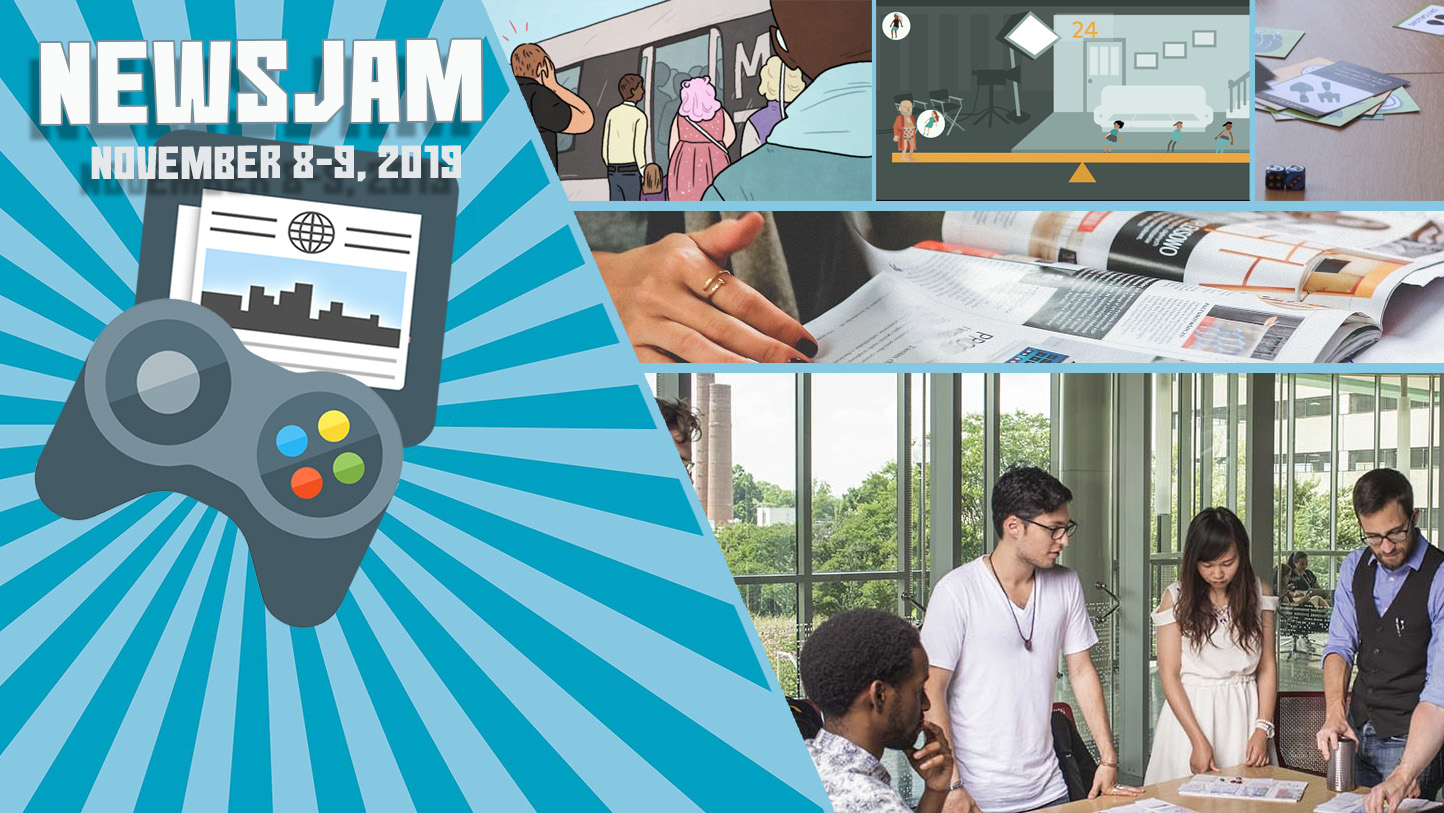 The Newsjam is an opportunity to rally community around games for reporting, playful infographics, data driven play, persuasive games and anything that's about helping improve the news through game design. Work and play with other game designers, programmers and artists to inspire the spirit of political activism and news reporting into games. This year, there will a Newsjam in Washington, DC and one in Miami,Florida. You can participate at either, but not both, locations. The Newsjam is an event sponsored by the Knight Foundation and the American University Game Lab and the University of Miami School of Communication. In its second year, it is a 24 hour game jam with a very specific focus - the intersection of news, games. and community. It’s an opportunity to experiment with games as a way of connecting people with the news, empowering citizen reporters or re-envisioning the way we learn about the world around us.

Read a news article about the 2017 Newsjam here

The event will open on November 8th, 2019 at 5:00 PM, and end the following day at 6:00 PM. The rules are simple- on the day of the event each team will be given a collection of the week's news items on which they will make a quick game, toy or interactive. Beyond providing the opportunity to work with others, the event will be hosted by professionals who have made such games in the past. You won't go on this journey alone, you'll be well supported by people who have done it in the past.

We invite anyone and everyone who is interested in making digital games, location based games, mobile games, board games, print to play board games and more to come. The best games may be invited to extend development toward a final, public release under guidance from experienced professionals in our community.
The world is changing. We invite you to be a part of that change.

Click to read about the 1st Newsjam, in Miami, Florida in 2017

Newsjam from 2017 at the University of Miami

Never jammed before, here's what to know: 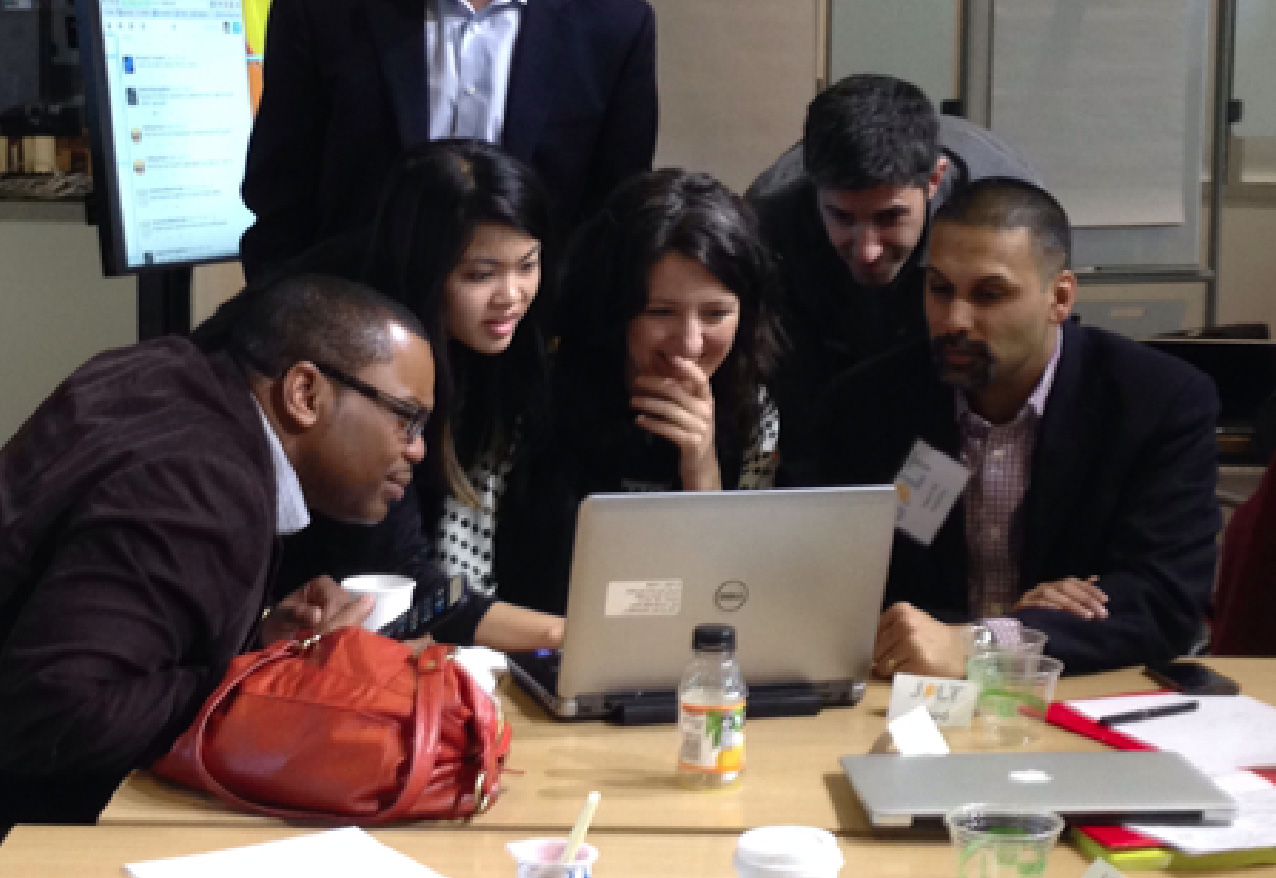 Game jams are all day (and sometimes night) game making marathons. Start with lots of energy. After that, think about bringing anything that's going to help you be creative, comfortable, and brilliant. Your paid registration includes food for the full 24 hours (including snacks). Since it's at American University's Game Lab and the University of Miami School of Communication, you'll have plenty of options if you want to get out and stretch your legs.

Attending our jam is like going to camp for the weekend (without tents, cots, or the outdoors). Pack accordingly, but leave the bug spray at home. We provide community space, conference rooms, people to collaborate with, prizes, Internet access and more. Depending on your distance from the universities, you may want a place to stay at night.
Here are a few things you might want to bring:

We define Newsgames broadly. We want to help people make games about current topics. Journalism, social change, and political action happen in lots of ways today, and we think games should be a part of those equations. Maybe you'll design the next climate change game, or provide new perspective on immigration. Maybe you'll help us experience our news in news ways, or find playful ways to get us inspired to take action. We want you to feel free to do what you want. 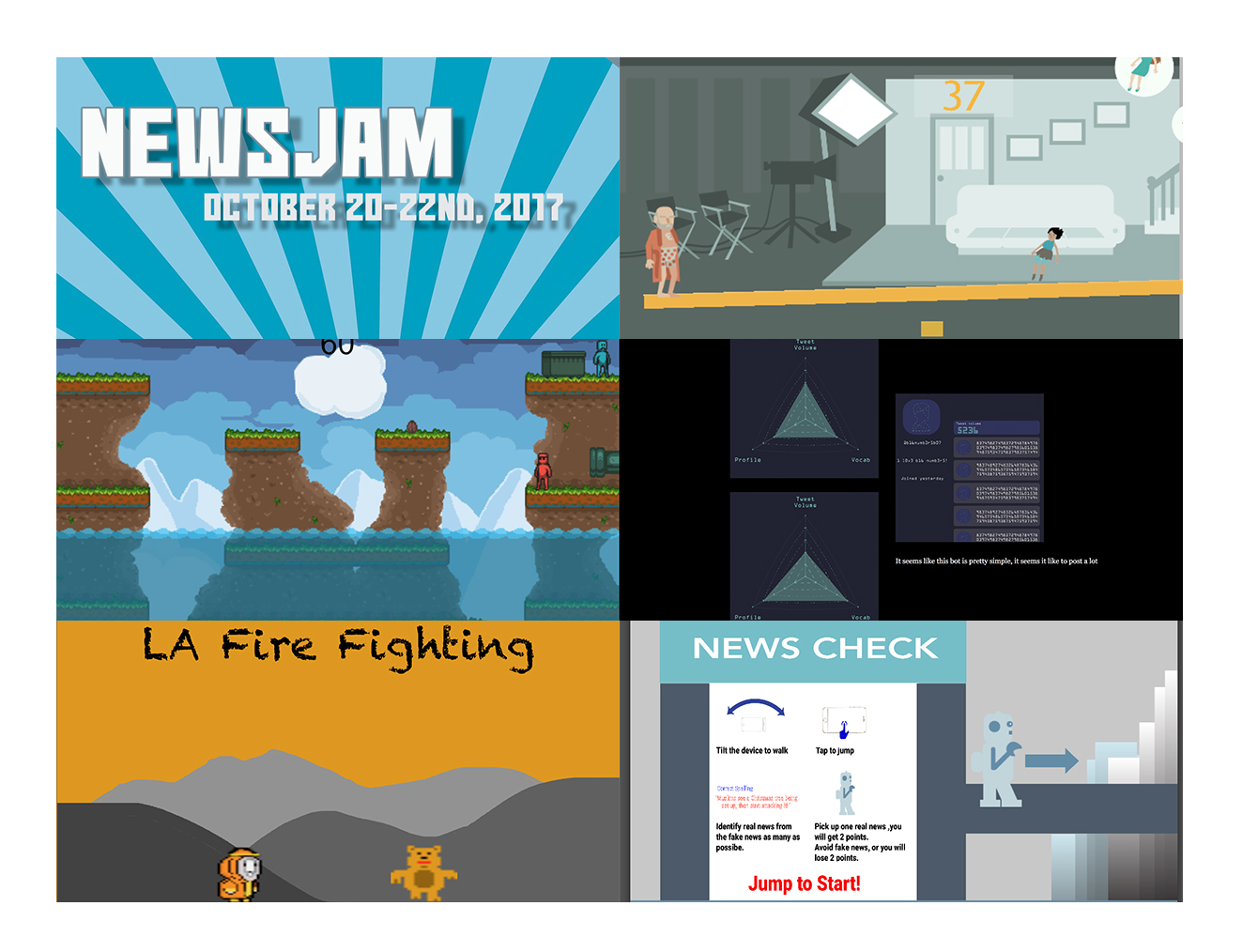 We don't expect everyone who participates to know anything about newsgames, but if you want to learn more, here's some resources and inspiration we think you should consider: 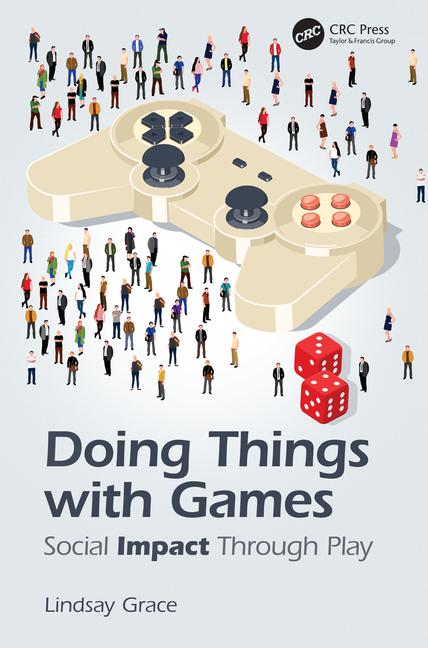 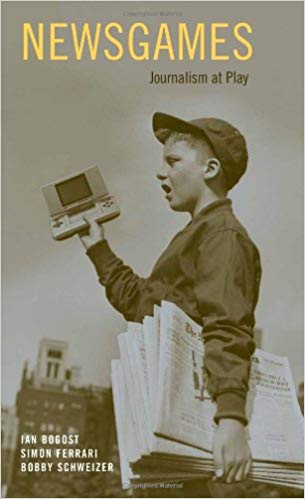 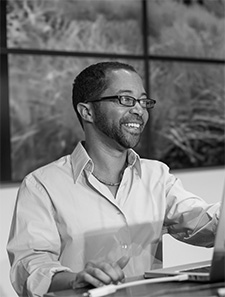 Lindsay Grace is Knight Chair of Interactive Media and an associate professor at the University of Miami School of Communication. He is Vice President for the Higher Education Video Game Alliance and the 2019 recipient of the Games for Change Vanguard award. He organized the 2017 Newsjam in Miami. He is a Professor-game designer, developer, artist and author of Doing Things with Games: Social Impact through Play. He is the former Vice President of the Global Game Jam and has co-organized or hosted 10 game jams and conferences. 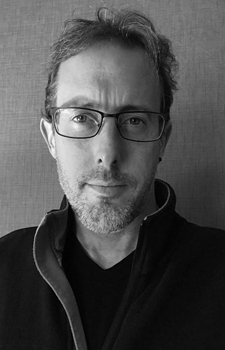 Andrew "Andy" Phelps is a professor at the Human Interface Technologies Laboratory NZ (HITLabNZ) within the College of Engineering at the University of Canterbury and Phelps also serves as a Professor in the Film & Media Arts division of the School of Communication at American University, as Director of the AU Game Lab. His work is focused on virtual and augmented reality, games and education, and art and interactive media experiences of several varieties. In addition to his individual research and creative practice, supervision of students, and teaching activities, he is heavily engaged in building a new effort within the university, the Applied Immersive Gaming Initiative (AIGI), in collaboration with other faculty and staff at the HITLab, UC, and ChristchurchNZ, the city’s promotion and economic development agency. 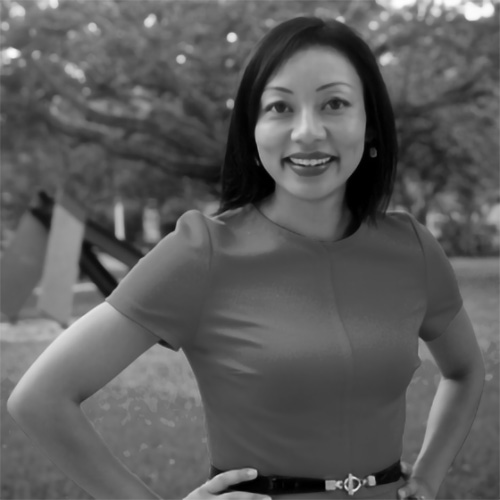 Lien Tran s an assistant professor of interactive media at the University of Miami where she teaches game, web, and interaction design and is co-director of the New Experience Research and Design Lab (NERDLab), a student-faculty cooperative driven by research, development, and an enthusiasm for social impact. She is an award-winning game designer who has serious fun breaking down real-world complexity into interactive systems for social good. Her creative practice includes designing interactive systems that help non-profits and humanitarian organizations communicate critical messages in an accessible and engaging manner. Her project partnerships include Open Society Foundations, U.N., Red Cross, and World Bank and across UM including with the School of Education, Miller School of Medicine, School of Nursing and Health Studies, School of Law, and College of Arts and Sciences.. 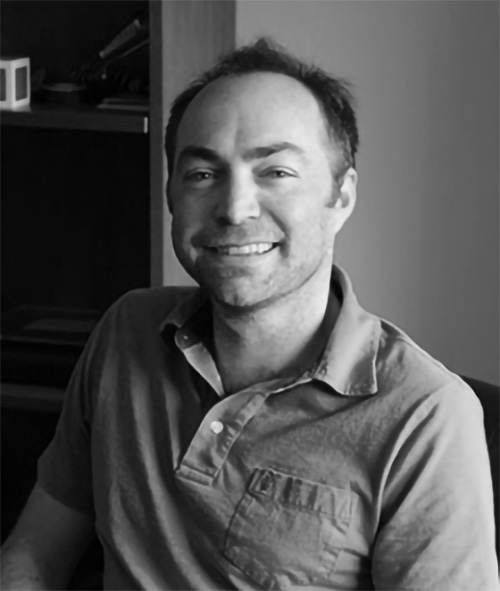 Clay Ewing is a creative technologist with a focus on serious games, implementing game mechanics into real world applications, and social justice. As an award winning game designer and developer, Professor Ewing’s games have tackled issues such as vector borne diseases, the cost of health care, social safety nets and labor practices. His most recent game, Unsavory, is the winner of a special emphasis award at the Serious Games Showcase and Challenge for its use of social media crowdsourcing for peer learning. Clay has worked with numerous non-profits including Red Cross Red Crescent, Open Society Foundations, ROC United, Oxfam, and the AIDS & Rights Alliance for Southern Africa. His projects have been covered by The Huffington Post, NPR, Forbes, and The Consumerist. He also is the creator of Queso, an open source learning management for gamifying the classroom.